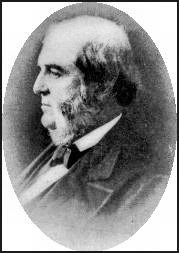 In a book entitled The Hour of Peril: The Secret Plot to Murder Lincoln before the Civil War (Minotaur 2013), author Daniel Stashower has shown the key role that Edwards S. Sanford played in the race to prevent the assassination of President-elect Abraham Lincoln as he journeyed across six states by rail on his way to his inauguration in 1861. The hero of Stashower’s nonfiction narrative is Allan Pinkerton, who was at the time creating the profession of crime detection out of whole cloth. But Pinkerton might never have been in a position to assist in frustrating the assassination attempt had Edwards Sanford not turned to him a few years earlier in 1858.

At that time, Sanford was vice president of the Adams Express Company, which along with Wells Fargo and American Express was vying for contracts with the United States Postal Service to ensure the safe transportation of mail, parcels, and moneybags. These companies sent couriers, or expressmen, to accompany parcels across the country via horses, stagecoaches, or, in 1858, railroad cars. But if they could not protect the goods they were transporting, how could they compete?

In 1858, Sanford’s company was faced with a problem: A shipment of cash had been stolen from a locked courier box while in transit from Montgomery, Alabama, to Augusta, Georgia. If the Adams Express Company could not solve this crime—and prevent others—it would not be competitive in the fledgling industry. Therefore, Sanford turned to Pinkerton, assuring him that he (Pinkerton) need not leave his headquarters in Chicago to investigate the crime; rather, Sanford hoped that, using advice from Pinkerton, he could conduct the investigation himself.

Like the barons of the express companies, Pinkerton also desired to succeed and flourish and knew a good opportunity when he saw one. So, as Stashower tells the tale, Pinkerton isolated himself for a weekend and came up with a theory as to how the theft was accomplished. The money had never made it aboard the train in the first place, he reasoned. The theft was the result of an inside job, so he advised Sanford to closely observe the actions of the Adams Express employee who was the last person to have the locked box and its key in his possession before the box was placed on the train, one Nathan Maroney.

However, collaring Maroney was not easy. A well-respected citizen, he became the rallying point for pro-slavery Southerners who viewed the Alabama-born Maroney as a victim of the formidable Northerner, Edwards S. Sanford of New York.

Now, step aside and think for a minute about Jack Bauer (played by Keith Sutherland) and the seven-season hit show 24, for herein lies a comparison. With their wits and the histrionic skills needed by every good spy, Pinkerton and Sanford set up an elaborate nineteenth-century plot to trip up Maroney, an operation replete with three persons in false identities and some split-second timing—or the nineteenth-century equivalent thereof. Stashower’s excellent account of the plot can be found on pp. 50-57 of his book. Let it suffice here to say that their plot was a success, Maroney was caught red-handed, and the Adams Express Company was of very sound reputation.

News of the success of Sanford and Pinkerton spread throughout the railroad community, reaching the ears of Samuel Felton, president of the Philadelphia, Wilmington, and Baltimore Railroad. Mr. Felton enters the story as the person charged with the safety of the newly elected president, who would be traveling to Washington, D.C., via the PW&B early in 1861 on his way to his inauguration. Mr. Lincoln, being a kindly gent, did not seem sufficiently alarmed, in Mr. Felton’s view, by the gravity of his situation. But Felton was determined that fanatic secessionists would not spill presidential blood on his trains and turned to Allan Pinkerton, whose success with the Adams Express Company robbery was well known.

By this time, Edwards Sanford, still a vice-president with Adams Express, was also the president of the American Telegraph Company, which positioned him at the top of the transportation and communications network so important to Felton and Pinkerton. As Stashower puts it, Sanford “would be able to assist in controlling the flow of crucial information in and out of Baltimore” (p. 196). It is important to keep in mind that at this point in history, the Secret Service had not come into existence (ironically, Lincoln would sign the bill authorizing the establishment of the Secret Service on the morning of the day he was assassinated in 1865, though even then it was not organized as a presidential security detail).

Almost all of the work to prevent this assassination was undertaken by patriotic private citizens in a position to help. Sanford, working alongside Pinkerton and his “Eyes” (including the first woman in American crime detection, Kate Warne), became central to the success of the effort to save Abe Lincoln. He invited in a “young attaché” named George H. Burns to serve as a courier between those who were working undercover in their various disguises and false identities, and he provided the principals full access to the services of American Telegraph in their communications.

At one point, Sanford even agreed not to allow transmission of a telegram from Lincoln’s vice president-elect Hannibal Hamlin regarding his own transportation plans to D.C. As in our own day, the concern was that newspaper reporters more concerned about sensation than sensitivity would intercept the communications and mess up the delicate works being carefully performed by Pinkerton’s operatives under the enormous pressures of time and distance.

Realizing, however, that telegraphic communication was the key to their success, they cooked up sobriquets for all the principals, using merchandise from the green grocer in code. Lincoln, I’m sad to say, was called “Nuts” in these communiques. Leaving the details of Pinkerton’s plot to Stashower’s book, I will simply close by saying that when Pinkerton finally managed to sneak Lincoln past Baltimore and into D.C., he telegraphed his friend Sanford, saying: “Plums arrived here with Nuts this morning—all right.”

A few weeks later when the Civil War began with the attack on Fort Sumter, April 12, 1861, the federal government found itself with no military telegraphic organization and no budget for its establishment. Until October, Edwards S. Sanford and the American Telegraph Company paid for the men and matériel necessary to the establishment of government communications by telegraph. Sanford, now known to President Lincoln as a trustworthy man, was a part of the United States Volunteers in the Civil War with the rank of colonel and was brevetted to Brigadier General on March 13, 1865.

His communications contributions to the war effort were significant, but the ground had been laid in Sanford's service to the country in the events leading up to the safe delivery of President-elect Lincoln to Washington, D.C., in the early months of 1861. Edwards Sanford, who was named for the famous Puritan minister Jonathan Edwards, died on September 9, 1882, and is buried in Green-Wood Cemetery, Brooklyn, Kings County, New York. http://geneabloggers.com
at December 27, 2012 No comments: