Those Places Thursday - Where Was Gallow Hill?

Doing research on Clan Bain in Dingwall, Ross and Cromarty, Scotland, I came across the marriage record of John Bain and Anne Kemp, in the old registers of Dingwall parish. The two were married on November 30, 1805, and the handwritten record identifies Anne as “daughter to John Kemp in Gallowhill.”[1]  But where was Gallowhill, or, as I later learned to write it, Gallow Hill?

In order to understand Gallow Hill, one needs to know a bit about the town of Dingwall. It was the poet Robert Southey who, while in Dingwall in 1819, indicated to the engineer Thomas Telford that Dingwall reminded him “in its name of the Icelandic capital Thingvalla.”[2]  Archaeological research has proven Southey’s instinct to be true: Dingwall has Norse origins.

To be specific, the name Dingwall derives from the Norse Þingvöllr, which means field, or meeting place, of the thing.   The thing (sometimes spelled Þing) was the Norse representative assembly where political decisions were made and legal disputes settled.  Other places in Scandinavian-controlled areas with similar names are Tynwald on the Isle of Man, Tingwall on Orkney, Tingwall on Shetland, Thingwall on the Wirral Peninsula, Þingvellir in Iceland, Tingwalla in Sweden, and Tingvoll in Norway.

To determine the exact site of the thing in Dingwall, the Highland Council commissioned the chairman of the Dingwall historical society, David D. MacDonald, in 2012.  By using Scottish historical records, knowledge of Norse practice regarding the thing, and even ground-penetrating radar, MacDonald and his team were able to conclude that the site of the Dingwall thing was a mound in city center already marked with an obelisk, erected in 1710 by Sir George Mackenzie, the 1st Earl of Cromartie.  (Following his death, the earl was actually buried next to the obelisk, meaning that today he is completely surrounded by a parking lot.) 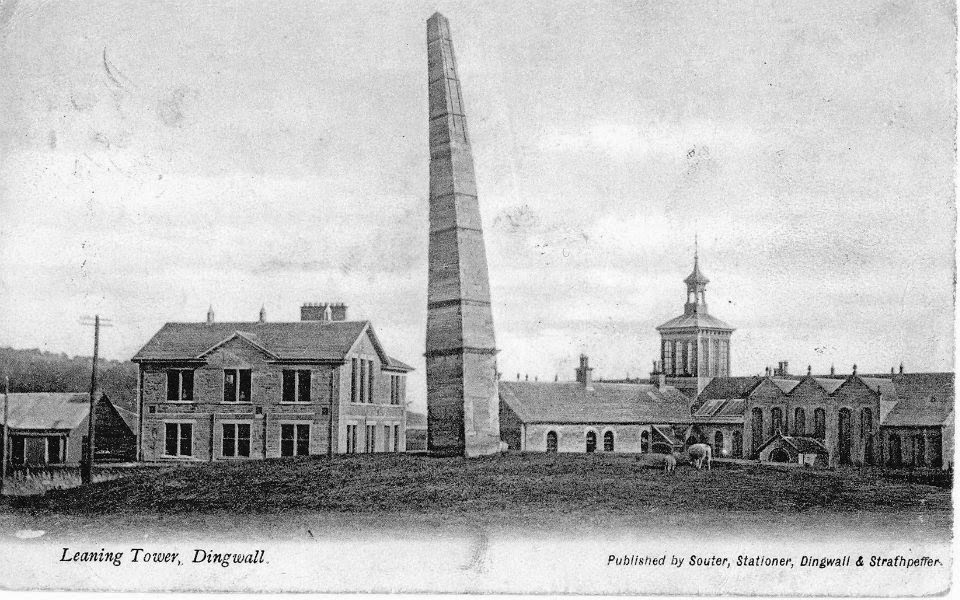 That the obelisk mound might have been the site of the assembly is confirmed by the fact that in the vicinity of the thing there was normally a church, which may, in the Christian era, have replaced a pagan shrine of old.  (In the case of Dingwall, the absence of pagan burials in the vicinity suggests that the establishment of the thing in that area occurred after the coming of Christianity.[3])  In Dingwall, St. Clements Church stands just opposite the site of the the earl of Cromartie’s obelisk, and though the current church dates only from the first decade of the nineteenth century, it was raised on the site where a church called St. Clements had stood since medieval times.

Now, in addition to a church, there was one other site associated with the Scandanavian thing: a gallows. When a court case at the thing resulted in a sentence of death, the condemned man would be taken to a place called in the Norse language a galgeberg, or, in English, Gallow(s) Hill.  A continental example of such a site is in Oslo, Norway, in the  neighborhood called Galgeberg (Gallows Hill), which in medieval times lay outside the town.[4]   The execution site, though typically within view of the thing, was normally separated far enough from it that the smell of death would not taint the vicinity of the dignified assembly.[5]  Dingwall’s Gallow Hill was no exception, being “600 m. west from the medieval town,”[6] according to MacDonald.

When antiquarian Robert Bain wrote his History of the Ancient Province of Ross in 1899, he mentioned Gallow Hill in this way (he mistakenly believed the thing was located near it):  “The historic hill itself is situated at the west end of Dingwall, and, we are sorry to say, has lately, to its great disfigurement, been in the hands of the Vandals; the profits arising from its use as a gravel pit outweighing every other consideration whatsoever.”  According to MacDonald, this is a reference to the gravel pit opened on the Tulloch Estate in 1892, which he identifies as “immediately west of Mill Street.”[7]  (The Tulloch Estate is associated with Tulloch Castle, which lies to the north of Dingwall.  The castle was acquired by the Bains in 1513 and the surrounding lands in 1542, when Duncan Bane was made 1st Laird of Tulloch by James V.)

Now, there remains only one point to nail down: the Kemp connection to Gallow Hill.  Sometimes after intuition and hard work, one finds a golden nugget that answers questions about the family tree.  Other times, it’s just dumb luck.  So it was that as I was researching Gallow Hill, I stumbled across a charter whereby in 1506, William Kemp, burgess of Dingwall, was granted lands by Sir John Dingwall, vicar of the churches of Petty and Bracholy (or “Brachowy,” as the scribe had written it).  Among these lands was “an half acre lying near the Gallowhill between the lands of the [Munro] laird of Foulis on the west and the lands of William Dingwall on the east.”[8]  One of those little light bulbs must have appeared over my head.  The Kemps, it turned out, had had an association with Gallow Hill long before there was ever an Anne Kemp (b. 1780) or her father John (b. 1750).

In 1821, a fellow named John Wood of Edinburgh surveyed the town of Dingwall and prepared a plan that researchers still use to study the history of Dingwall.  On the far west side of town, just at the point where Dingwall ends and Gallow Hill takes up, Wood’s plan shows twelve dwellings, eleven of which were occupied in 1821.  They are on Mill Street.  And about in the middle of the group there are two adjacent houses whose owner/occupants are identified as A. Baine and J. Baine.  I’m more than 50 % confident that the J. Baine of 1821 Dingwall in what has to be the Gallow Hill neighborhood is the John Baine who married Anne Kemp in 1805.  By this time, all of their children would have been born, except for the youngest, Katharine, born in 1822.

The first valuation rolls in Scotland were not taken until 1865.  At that time, my direct ancestor, John and Anne’s son Donald, a shoemaker, had moved on to Wick in Caithness.  But the rolls still show another Donald Bain, a mason, in Dingwall . . . on Mill Street . . . in Gallow Hill.