﻿
When I was researching my great-aunt, Rena Alice Travis (1893-1972), I had the pleasure of coming across a little gem that I had never heard of before.  In order to understand my "flabberghast-ation," you will first need to know a little about Rena's independence.  Though unusual for her time and era, Rena never married.  She had been engaged as a young woman, but her fiancé drowned in a boating accident.  Having lost the love of her life, she resolved never to marry, which meant, of course, that she needed to find a way to support herself.
Now, Rena had been born in Reilly, Kansas, which is in Nemaha County—in the northeast quadrant of the state.  Nemaha County is north of and contiguous to Pottawatomie County, where Rena appears in the 1905 Kansas State Census records at the age of 11, residing with her parents in Green Township.  So, as far as I knew, Rena had left her home in Green Township and moved, at some point in time, to Los Angeles, California, where she worked as a bookkeeper for many years.

So, you can imagine how surprised I was when a Google search turned up a Rena Alice Travis at the University of Colorado for summer courses in the academic year 1920-21.  This seemed too amazing for me, and I thought it just had to be someone with the same name.  After all, Pottawatomie County, Kansas, is immediately adjacent to Riley County, where Kansas State University is located.  Why would Rena leave her family and go all the way to Colorado to school when she could live much closer to home by attending classes at at K-State (or, Kansas State Agricultural College, as it was known at the time)?

So, I made an Internet search for Garrison, Kansas, and what to my wondering eyes should appear but a map of Pottawatomie County, Kansas, showing Garrison as the westernmost town in the county.  A bit more digging turned up this description: "Garrison, a village of Pottawatomie county, is located in Green township. . . . [emphasis mine]."  Well, now we were down to a statistical impossibility.  This was my Rena--and no other!

Hooray for the great little website, Lost Kansas Communities! They really made my day. 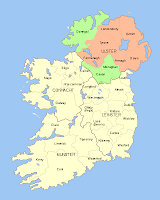 William Gamble was born in 1770 in Ulster. Cavan County was one of three Irish counties which are now in the Republic of Ireland but originally part of Ulster. Ulster was an ancient kingdom now largely coterminous with Northern Ireland, which is part of the United Kingdom and a separate country from the Republic of Ireland.

Gamble died in Ohio, USA, in 1845. Is it possible that William Gamble moved his family from Ireland during the political upheaval that occurred there in the late eighteenth century?

The long and troubled history of relations between England and Ireland (bound up inevitably with Protestant and Roman Catholic conflicts) resulted in a number of bloody uprisings against English rule in Ireland, a period known in history as the Rebellion of 1798. These uprisings were inspired by both the American Revolution, begun in 1776, and the French Revolution, begun in 1789.

The English, motivated by a desire to restore order in Ireland and concern over the French involvement in the Irish Rebellion, drove for a closer political union between Ireland and England, resulting in the Act of Union of 1800. Though County Cavan seems not to have been a center of the rebellion, one still must wonder if the turmoil in the country served as the impetus to send the Gambles to America in search of a fresh start.