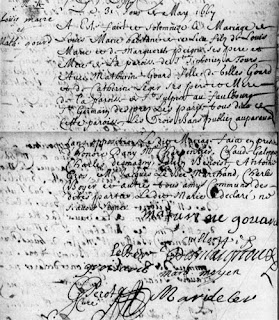 In addition to the 75-livre dowry that each young lady had brought with her, Louis offered the husbands of the Filles du Roi a one-time disbursement of 100 livres if they would stay in New France and establish families. Moreover, men who fathered ten children would receive 300 additional livres per year; and those who fathered twelve, 400. Such arrangements do not sit well with modern sensitivities, but marriage has always had a business component to it—and at least the couples were allowed to choose their own spouses. The king did not meddle in the particular matches. By the time Louis Marie met Mathurine Goard (and we do not know the exact date or circumstances surrounding their meeting), his surname had changed a bit. It seems the regimental records of the soldiers’ names became confusing to authorities since so many lads had very similar names—the French equivalents, I suppose, of Tommy Atkins or John Smith. Therefore, each man was encouraged to take a particular identifying name—a nom de guerre, of sorts, and our Louis Marie modified his name to become Louis Marie dit Sainte-Marie. The word "dit" (pronounced “dee”) means "said," but a looser translation—and one that would sound more typical in English—would be "called." Therefore, Louis’s name became “Louis Marie called Sainte-Marie.” It is hard to say exactly how Louis came to choose this name, but it may be an indication of the fact that he was indeed among the members of the regiment who built Fort Sainte-Marie upon arrival in Quebec. Like Louis, most of the others who decided to settle in Canada kept their dit names, passing them on to their children and sometimes even discontinuing use of their original surnames. So, at some point in time, Louis Marie dit Sainte-Marie made his way to Marguerite Bourgeoys’s establishment and began a courtship with Mathurine. According to Yve Landry, who wrote a book about the Filles du Roi, it was common practice that the prospective brides and grooms would become engaged in the church, with the priest as a witness. The European custom of proclaiming the marriage banns three times before the actual ceremony could take place gave way to the practical nature of Canadian frontier life and were usually discontinued. Louis and Mathurine were married on May 31, 1667, in the Basilique Notre Dame de Montreal, which was operated at the time by the Sulpician Fathers, who, interestingly, had originated at the Church of Ste. Sulpice in Paris, where Marthurine’s parents were married and where she was baptized. There is an extant record that in 1671 Louis Marie dit Ste-Marie owned land in Longueil, Quebec, a city directly south of Montreal across the St. Lawrence River. This must have been the homestead where Louis and Marguerite lived and raised their family of ten children, four boys and six girls. Louis passed away in December 2, 1702, and is buried in Montreal. Marguerite lived on for eighteen years, dying in Montreal on December 9, 1720. It is highly likely that the two were buried at the Basilique Notre Dame, which remained their place of worship throughout their lives. Unfortunately, in the intervening (nearly) 300 years, the site of the old cemetery, just inside the northern wall, has become the location of numerous city buildings, though the remains of the founders of Montreal are presumed still to repose in the earth beneath them. The Society of the Daughters of the King and Soldiers of the Carignan[-Salieres Regiment] states, “Most of the millions of people of French Canadian descent today, both in Quebec and the rest of Canada and the USA (and beyond!), are descendants of one or more of these courageous women of the 17th century.” And, more specifically, genealogist Raymond M. Ste-Marie, a descendant of Louis and Mathurine, has catalogued all marriages on record in Canada involving the Ste-Marie surname—2,000 in all! Acknowledging the fact that for millenia, it was not uncommon for couples to have ten or more children—and they ten more, in their turn—one can see that the descendants of Louis Marie dit Ste-Marie and Mathurine Goard number in the millions. This rich heritage truly makes up for the loneliness of the little orphan girl in St-Sulpice and the young lady setting out to a strange new world with a glimmer of matrimonial hope. Though it might have been hard to see at the time, God had a plan all along. Sources: http://genforum.genealogy.com/madore/messages/200.html http://www.basiliquenddm.org/en/basilica/history.aspx http://howellresearch.com/d0109/g0000012.html
at January 26, 2013 6 comments: 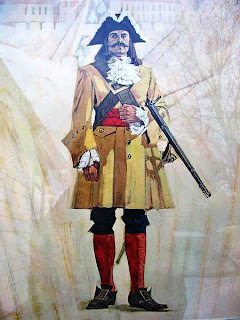 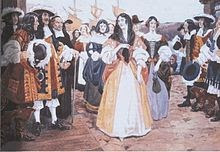 When a little girl is left an orphan at the age of four, most of us would cry out and ask, “Where is God? Why do these bad things happen to such an innocent child?” And, of course, that is a natural enough reaction. But there is another way to look at it. Had Gilles Goard and his wife Catherine Leger not died young, their daughter Mathurine Goard (born 1648) would never have boarded a ship for New France in 1666, as one of the Filles du Roi, a program established by King Louis XIV to send young Frenchwomen to marry French soldiers in Quebec. Had that not happened, five people very important to me—including my own granddaughter—would never have been born. Through Mathurine’s tragic loss in childhood—and a hefty dose of courage as a young woman—God’s plan has been made more apparent. Mathurine was born in the Faubourg Saint-Germain-des-Pres on the Ile-de-France in Paris and was baptized at Saint-Sulpice de Paris. Though nothing to date has turned up to tell us about her father, Gilles [pronounced “Zheel”] Goard, much is known about the area where the family lived. The word “faubourg” means “suburb” and refers to the fact that the area originated as a suburb of Paris. The word derives from the Latin word “foris,” which meant “opening” or “gate.” So, a “faubourg” was a collection of houses that grew up outside the gate of a town or a vicinity of a town. Thus, Faubourg Saint-Germain-des-Pres was a little housing area immediately adjacent to Saint-Germain-des-Pres. Saint-Germain-des-Pres is in the Ile-de-France (or perhaps one should say on, since it translates as the Isle of France, so named because the area is an island surrounded by the various rivers that run through Paris). This area is and always has been a "posh" area of the city of Paris. To say that it is on the Left Bank, is to say that it is in the bohemian intellectual center with the Sorbonne University nearby. The area is sometimes referred to as the Latin Quarter, since the language of instruction at the Sorbonne was Latin "back in the day." The tourist web site *France at a Touch* says this about the Faubourg Saint-Germain-des-Pres as it is today: "It is bordered on the north by the Seine, to the east by the Invalides & Tour Eiffel Quarter, to the south by the Luxembourg Quarter and to the west by the Latin Quarter. The intellectual center of gravity, of this quarter of bistros, bookshops, coffee-houses, galleries, nightclubs and publishing houses, is at the intersection of rue Bonaparte and boulevard St-Germain." It would be fair to conjecture that Gilles Goard was a man who found employment in Saint-Germain-des-Pres. His wife, Mathurine’s mother, was named Catherine Leger (pronounced “lezh-EE”). Catherine had been born in Faubourg Saint-Germain-des-Pres in 1621 and married Gilles in 1645. Though the date of Gilles’s death is not certain, we know that Catherine died in 1650 away from home in Pouillenay about 135 miles southeast of Paris. She was twenty-nine at her death; little Mathurine, only two. Nothing is known about Mathurine’s upbringing or who exactly brought her up. But world events began to impact her life directly in 1663 when King Louis XIV became concerned that the English population in New England was outpacing that of the French population in New France. Though the English often took their wives with them, the French did not; as a result, the English population was growing considerably faster, and since France and England continued their age-old competition in the New World, King Louis was starting to worry. His solution to the problem was to create a program which he called Filles du Roi, Daughters of the King. Between 1663 and 1673, approximately 770 women, mostly orphans and daughters of impoverished aristocrats with no dowry, were given a wardrobe, a dowry of 75 livres, and free passage to Canada. A livre was worth a pound of silver, and if tools on the Internet can really help us figure this out, we could conclude that each of the brides was given more than enough to buy a cow but not enough to buy an ox. Since 770 women leaped at this chance for a new beginning in America, it must have seemed attractive to them. As it turned out, the king offered the men financial incentives as well, but more about that later. So, with her wardrobe and dowry, Mathurine boarded a ship in 1666, perhaps in Le Havre, a port city only 120 miles west of Paris, and began her approximately 60-day voyage to New France. Upon arrival in Quebec, she and her fellow Filles du Roi were probably met by a well-known figure in Montreal, Marguerite Bourgeoys, a middle-aged woman who had been educating children and caring for families in New France for over ten years. The young ladies were housed with Sister Marguerite, and in what we might call today a “home economics class,” she instructed them in “the art of housekeeping,” including “spinning wool, baking bread, making candles, weaving rag carpets, braiding rugs, butchering animals, planting a garden, etc.” But, most importantly perhaps for the girls, it was to Marguerite Bourgeoys’s “matrimonial agency” that young men seeking the acquaintance of a fille du roi would repair and undergo a severe examination process by the vigilant Marguerite. And here we introduce into our narrative a 32-year-old French soldier named Louis Marie dit Ste-Marie, a French soldier in Quebec. But who was Louis Marie?