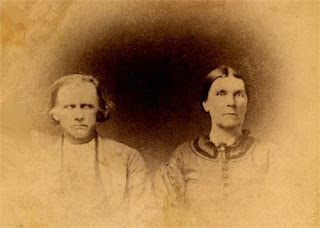 In about 1865 or so, in the fall of the year, David Gard (1815-1887), my great-great-grandfather, hitched his horse to his buggy and headed northeast to Saint Joe, Missouri, to stock up on supplies that would help him get his family through the winter. Flour, sugar, salt, cornmeal, beans, coffee, perhaps cured bacon and lard—all of these things and more a family might need to sustain themselves throughout the coming winter months in northeast Kansas. Before coming to Kansas, Davy and his family had lived in the Lead Region of Wisconsin, where Davy was employed through the Civil War. (Davy was already 46 when the war began, but his son John, who fought for the Union, was killed in the draft riots in Baltimore, Maryland, in 1861). The Gards were located at Wingville, Wisconsin (Grant County), near the Iowa border in the southwest corner of the state, but, looking for a fresh start after the war, the family moved farther west to northeast Kansas and found an attractive spot in Westmoreland (Pottawatomie County), which is in the beautiful Flint Hills area of the state. Of Davy’s ten children, four were still at home in 1865, and, of course, there was his wife, Mary (nee Cook). So as November rolled around, Davy kissed Mary and the children good-bye and headed east to buy supplies to sustain his family. As the crow flies, it is an 88-mile journey from Westmoreland to St. Joe, but even with today’s highway system, it is still 120 miles by road. Why Davy went northeast to St. Joe instead of southeast to Topeka is not known, but maps reveal that Marysville, Kansas (north and just a bit west of Westmoreland), was a waypoint for “the Oregon and California Trails, the Mormon Trail, the St. Joe branch of the California Trail, the Overland Stagecoach Route, the Pony Express Route, and the Military Road.” Today’s Highway 36 runs between Marysville and St. Joseph, Missouri, which was the eastern starting point of the Pony Express. In fact, “the section of US-36 from Washington, Kansas to St. Joseph, Missouri is officially called the Pony Express Highway because it marks the starting section of the Pony Express. It crosses the Missouri River on the Pony Express Bridge.” Roads around this system of trails would have been fairly well traveled, so if one met with an accident, help might be more likely to come down the pike than on other roads. Moreover, these trails were well-equipped with rope ferries for river crossings, and there was just nothing like these advantages for the traveler going between Westmoreland and Topeka. It is said that a horse pulling a wagon travels at about 4 mph, alternating between a walk and a trot. So, if Davy went by road using the Marysville routes, it would have been about a 30-hour trip to St. Joe, which would translate into three or four days of jolting travel. Apparently, Davy made it to St. Joe okay, but after loading his wagon with the necessary supplies and heading back to Westmoreland, he encountered some trouble. As the story goes, old Davy was set upon by some fellow who thought he had a right to what was in Davy’s cart, and a fight ensued. I do not know if Davy had stopped his cart and the “cart-jacker” had jumped in it while Davy was unawares, or if the highwayman stopped him with a weapon of some sort. But it wasn’t long before the two of them were in--to Davy's mind--a life-and-death struggle, since his family’s winter survival depended in large part to the load the other fellow was trying to steal! Now, we’re fortunate to have a picture of Davy Gard, from which we can see that he was not a big man, but I think he must have been a wiry fellow with muscles well developed working in the lead and zinc mines of southwest Wisconsin. So, if the robber thought he’d found an easy target in a rather slight 50-year-old man traveling alone, he was quite wrong. Somehow, Davy managed to take the man down, and with the bad guy sprawled beneath him, he placed his thumbs near the eye sockets at the bridge of the nose and applied pressure, employing the muscle power he had once used hacking lead off the wall of a mine. And it was still working for him: the poor fellow’s eyeballs popped right out. Now, this would have stopped almost anyone from doing anything--the way I see it--so the bad guy gave up and, no doubt, took up moaning, groaning, and complaining. Davy, meanwhile, was able to dust himself off, climb back into his cart, cluck to his horse to giddy-up, and set out once again for wife and children. No word on what happened to the brigand.