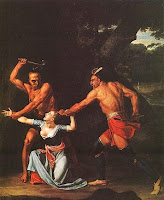 James Roark was a first-generation American of Irish descent born in Virginia in 1740.  Marrying in about 1764, he and his wife built a log cabin and started their family in Tazewell County, Virginia.  Their home was at the gap of the dividing ridge between the Clinch and Sandy Rivers where Dry Fork Road passes through.  Today this is at the intersection of State Routes 631 and 637 (see link to map below).  This spot came to be called Roark’s Gap, no doubt in memory of what happened to the Roarks on March 18, 1780.


The harsh winter had not yet snapped in the Baptist Valley of southwest Virginia, and the ground was covered with snow.  Indian predations had been halted since the previous summer when the neighboring Evans family had been massacred by the Shawnee, so James had probably become secure in the relative tranquility of the area.  Because of the long, hard winter, even those pioneers who had livestock were finding that little meat was still available, so James was compelled to set out that morning with his two older sons to hunt for their provisions.


However, as Robert Burns once wrote, “The best laid plans of mice and men gang oft agley,” and so it was that Thursday morning.  Upon their return, the three hunters discovered that, contrary to their expectations, the Shawnee were, in fact, on the move again in the area, and the worst imaginable disaster had taken place.  In their attack on the Roark home, the Indians had killed and scalped Mrs. Roark and all of her small children.  The best account of the incident indicates that seven children were killed, though names are not provided.  It was originally stated that the Roarks’ baby girl had survived, but, if so, she is thought to have died soon after as there is no further written record of this child. 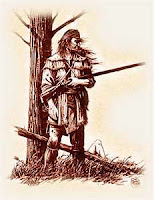 Today we probably cannot even begin to imagine how a man could dig eight graves in frozen mountain ground and bury his family and his hopes.  Too distraught to remain living in the cabin where the massacre had occurred, Roark built another home on a strip of land he owned somewhat nearer the river, but "settling" was really no longer an option for him.   Much like Lewis Wetzel, "Dark Hero of the Ohio" (left), Roark and his oldest son, John, devoted themselves to revenge and involved themselves in a number of fights with the Shawnee and other tribes until they were killed in an encounter at Harman’s Station in Block House Bottom of (then) Floyd County, Kentucky.


The fate of Roark’s eleven-year-old son Timothy is told in a separate narrative entitled “Timothy Roark’s Escape from the Shawnee,” The Kith and Kin Chronicles, 16 March 2013. 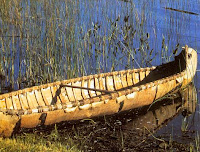 James Roark, who lost most of his family to an Indian massacre on March 18, 1780, suffered twice at the hands of the Shawnee.  When his family was attacked that day, 11-year-old Timothy Roark, it is said, had fought back with a toy hatchet and, for his bravery, was spared.  Whether that is the reason or not, young Timothy was kidnapped at age 11 and remained with the Indians until he finally contrived a means of escape some years later.


Though some have speculated that Timothy was taken at a later date, it is just as easy to reckon that he was captured on March 18, and living to tell the tale, was probably the person who later reported the story of the boy and his toy hatchet; otherwise, how would it have become known?


Over the time he was among the Shawnee, he must have conceived countless plans as to how he could escape.  Transport out of the area would have been key to a successful escape, and the plan Timothy eventually used involved a horse and a canoe.  Having earned the trust of the Indians, he was sometimes left unescorted, and one day he managed to slip away from them.


Not willing to leave behind two girls who had been in captivity with him, he managed to take them as well.  One account of their story states, “They rode horseback to the river where Timothy had hidden a canoe, and by paddling furiously, they made their escape.”  By then, he must have known the area like the back of his hand, and he managed to make it back to the white settlements in the region, reuniting Sarah Bolen and her younger sister Lucy with their families. 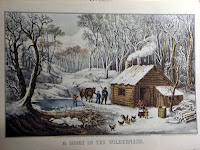 But that is not the end of the story.  By 1798, Timothy had married Sarah Bolen, and their first son was born that year in October.  They settled in at Cave Spring in Claiborne County, Tennessee, where they raised their thirteen children and lived, it is hoped, as happily ever after as everyone in a Currier and Ives painting.

On Ancestry.com, Bottom Station, Kentucky, is frequently identified as the place of death for James Roark (1740-1792) and his son John (1769-1792), while others list the location as Harman’s Station.  From what I can tell, these are one and the same place.  In this case, the term Bottom is a geographical term referring to low-lying alluvial land adjacent to a river, while the word Station denotes a stopping place for travelers.


Some confusion is caused by the fact that Bottom Station is said to be in Floyd County, while Harman’s Station is in Johnson County.  However, this can be explained by the fact that in 1792 when Roark died fighting the Indians at “Bottom Station,” Johnson County had not yet been formed.  Thus, Floyd County would be the county of the station’s location (below left).[i]

As one source puts it, in 1750, Matthias Harman and others from the first white settlement in North Carolina “established a hunting station and built a large cabin of logs, prior to the Sandy Creek Voyage, on the identical spot which afterwards became the site of their blockhouse”[ii]  Since white settlements were few and far between, Harman’s Station became a gathering place for hunters, traders, and other whites who passed through the region.  An article hosted by Rootsweb, refers to the location as “Harmon Station in Historic Block House Bottom" (above right)[iii]  It is easy enough to see how the terminology can become confusing. 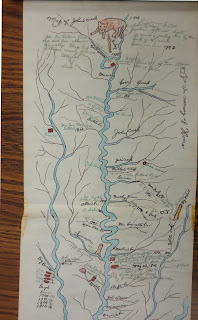 Harman’s Station is well known for its part in the 1789 captivity narrative of Jenny Wiley.  Mrs. Wiley, while her husband was away, was attacked by Indians who slaughtered her children and took her into captivity.  After eleven months, Mrs. Wiley managed to escape from the Indians and is said to have clung to (or straddled) a sizable tree branch as it floated down the river.  At Harman’s Station, which was on John’s Creek, she was rescued, but not without a fight between her rescuers and the Indians who were pursuing her.  Four years later, the situation had not improved much, and James Roark and his son Timothy died fighting Indians at Harman’s Station.


The accompanying hand-drawn map (above right) depicts Harman’s Station on Jones Creek with a red rectangle near the bottom of the map.[iv]  The handwriting says, “Block house built by Harman and Auxier.” It is east and across the river from Paintsville, Kentucky.


[i] http://www.thefullwiki.org/Johnson_County,_Kentucky
[ii] Connelley, William Elsey.  Eastern Kentucky papers; the founding of Harman's Station, with an Account of the Indian Captivity of Mrs. Jennie Wiley and the Exploration and Settlement of the Big Sandy Valley in the Virginias and Kentucky. NY: Torch, 1910. Web.  15 Mar. 2013. <http://www.archive.org/stream/easternkentuckyp00conn/easternkentuckyp00conn_djvu.txt >
[iii]22 Nov. 2009. Web. 15 Mar. 2013. <http://www.rootsweb.ancestry.com/~kyjchs/harmonstation.html>  Image used with permission.
[iv] This map was drawn in 1851 by Marion Tevis Burris and titled "In Memory of Home." Burris was born August 28, 1828, on John's Creek. Apr. 2009.  Web.  16 Mar. 2013. http://www.rootsweb.ancestry.com/~kycarter/maps/1851_map of_Johns_Creek.htm