Daniel Applegate, born about 1765, found himself motherless at the age of eleven, which was the fateful year 1776.  According to family tradition, he “was a stout boy” and was “put with a steady Dutch farmer” to be raised while his older brother, Benjamin, and his father, Richard Applegate, were serving in the Jersey Line in the Continental Army.  But wanting little of farm life when there was action to be had, Daniel ran away, traveling eighty miles to join his father and brother, but when he reached George Washington’s army, he discovered that the Jersey Line was serving elsewhere.  According to the story that was passed down in the family, “The officers were at a loss to know what to do with the boy, who like Jephet was in search of his father, and wanted to remain in the army until he could find him.  A kind-hearted colonel took him into his quarters, had him taught to play the fife, and had him enrolled as a fifer.  He also taught him to read, mostly from a newspaper, and he learned to write by imitating the common Roman letters.”  Other sources indicate that before the war was over, he served as a fifer, a drummer, and a color bearer.[i]


As fate would have it, little Daniel was with George Washington’s army at Valley Forge that terrible winter of 1777-78.  More than one drawing of that time shows a lad with a drum or a fife amongst the soldiers in the snow.  The engraving above, which appeared in the American art journal Aldine, shows General Washington himself with a drummer boy, and knowing Daniel’s story, one cannot help but wonder if it was originally intended to portray the Applegate lad. Officially, Daniel is listed as part of the 2nd New Jersey Regiment under Israel Shreve. That outfit saw action in all of the following conflicts:


Daniel remained with the army until it disbanded in New York in 1783.  One source indicates that Daniel may have gone to sea for a time after the war, possibly with a son of Colonel Shreve, who was said to be a sea captain.[ii]  However, the Shreve who developed the steamboat and for whom the city of Shrevesport was named was not born until after the Revolution.  Shreve’s oldest son, John, who was born to Israel Shreve’s first wife, had joined military service with his father when he was only thirteen years of age, so it is highly likely that he and young Daniel became close during the war.  John Shreve was twenty-one at the time the war ended.  His autobiographical sketch has been published but, alas, includes no mention of seagoing, so it is hard to say with whom eighteen-year-old Daniel Applegate would have gone to sea after the war.

Daniel appears in the records again in 1788 when he and his brother Benjamin turn up in northern Kentucky in the Ohio Valley area where the white settlers were encountering stiff opposition from the Iroquois Confederacy. It is important to note that Kentucky did not actually become a state until 1792, so in Daniel Applegate’s time, the term  Kentucky (spelled variously as Kentucke, Kaintuckee, and Cantucky) was a general Iroquois reference to the area south of the Ohio River.  ﻿﻿ 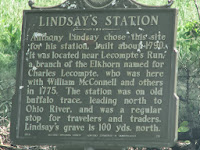 In 1788, Daniel was located at Lindsay's Station (or Fort) in what is now Scott County, Kentucky.  Lindsay's Station was a settlement established by Anthony Lindsay, a veteran of the French and Indian War and the American Revolution.  Descendant Frank Lindsay Applegate described Anthony Lindsay as “one of the early pioneers of the ‘Dark and Bloody Ground,’”[iii] a reference to the period in which northern and southern Indian tribes, notably the Cherokee and the Shawnee, had gone to war for control of the area.
﻿﻿﻿﻿﻿﻿


Ken Lindsay, writing in 2005, described the settlement as “a typical Two-Family Station of that day. Located high on a ridge overlooking a broad Buffalo Trace, a twelve-foot high stockade completely enclosed the area between two log block-houses. About two hundred feet apart, the houses stood at opposite ends of the stockade. Their only doors and windows were in the side of the wall which enclosed the two rows of logs that stood on end, making the stockade.”[iv]  There were other buildings as well, some of which served as a safe harbor for neighbors during Indian raids. 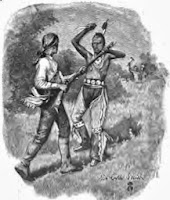 The Revolutionary War had given way to the Northwest Indian War, which was a series of ongoing conflicts between the new American government and the Iroquois Confederacy, mainly over control of the Ohio Valley, including northern Kentucky.  The Shawnee and other Kentucky area tribes were none too happy that they had not been consulted by the Iroquois, who had by and large ceded Kentucky to the whites, and attacks continued on white settlers for a number of years.  By 1790, 1,500 settlers had been killed in the area, and Daniel Applegate is known to have been a part of efforts to protect settlers in the region.

On June 10, 1790, Daniel married Anthony Lindsay’s daughter, Rachel, and until 1797 farmed about fifty acres of land which adjoined his father-in-law’s land in Franklin County, Kentucky.   On March 13, 1799, Daniel received 100 acres of bounty land for his service in the Revolutionary War (Warrant 8084).  In 1802, he moved his family to Henry County, Kentucky, where he and Rachel raised their nine children.  Something must have riled him up in 1801 because there is a record that, on February 4, 1808, he was fined fifteen shillings and spent three hours in jail “for cursing” in the Henry County, Kentucky, Court![v]

Despite that incident, Daniel Applegate had a remarkable reputation.  Writing about Lisbon Applegate, a Missouri historian once wrote, “His father [Daniel] being a man of comfortable circumstances and of ideas with regard to education gave his sons good schooling which they did not fail to improve. . . .”[vi]

When the War of 1812 broke out, both Daniel and his oldest son, Elisha, volunteered, serving with the 13th Regiment, Kentucky Militia, commanded by Lieutenant-Colonel Presley Gray.  It later became Lieutenant-Colonel John Davis's Regiment.[vii] Elisha did not survive the war, but Daniel returned to Henry County after the Battle of New Orleans.
In 1821, he was issued a one-year permit by the authorities of Henry County to operate a tavern in his home, but in 1822, instead of renewing the permit, he and Rachel left Kentucky for St. Louis, the capital of the Louisiana Territory.
Daniel Applegate died in Missouri on February 11, 1826.  According to the records of the Missouri chapter of the Sons of the American Revolution, Daniel died in St. Clair County, Missouri, which is on the western side of the state south of Kansas City.  This may be true since three of his sons were living there at the time.  However, his remains were returned to St. Louis County for burial in the St. Louis Cemetery.[viii]


[i] Based on information submitted in 1938 by Frank Lindsay Applegate on his application for membership in the Sons of the American Revolution.
[ii] Information from Hugh Vorees’ work, The Applegate Family in America, cited by John C. Butler. “The Applegate Trail.” http://www.uh.edu/~jbutler/gean/applegatetrail.html
[iii] Ibid.
[iv] Ken Lindsay. “Biography of Anthony Lindsay, Jr., (1736-1808): Soldier, Explorer, and Pioneer.  http://www.historical-footprints-2010.com/lindsay_2.html
[v]Hugh Vorees.