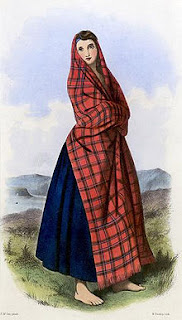 Just off the Scottish coast of the North Sea in early 1792, a ship came ashore at Staxigoe during a great storm. The Scots, being sea-faring folk, came to the rescue and welcomed the survivors into their homes in Staxigoe and nearby Wick. The captain of the wrecked vessel was put up at the home of Robert Sinclair, whose fifteen-year-old daughter Isabella caught his eye. Isabella, who later would be described by her granddaughter as a “proud-spirited” and “fine looking woman,” was a bright lass who had been planning to take advanced education at Edinburgh, which, at that time, was one of the leading universities of Europe. But her father, a merchant and burgess of Wick, fell ill, and Isabella could not afford to enroll. So, there she was in Wick at her father’s home when the storm-tossed captain took a seat at the fireplace to warm himself. Apparently the captain remained at the Sinclair residence for awhile, long enough to become smitten with Isabella’s spirit and beauty, and one night he asked the merchant and burgess of Wick for his daughter’s hand in marriage.
Perhaps the proposal sounded like a good match to Robert Sinclair, but to Isabella it was the worst possible development as she already had a sweetheart named John Sutherland, a lad in nearby John o’Groats, another Caithness coastal town to the north of Wick. Somehow (perhaps via a messenger dispatched by the distraught Isabella) word reached young John. Not one to let time and circumstances snatch his beloved from his hands, John—acknowledging the need for propriety—gathered up his sister and hurried to Wick to put a stop to the plans, probably following a sixteen-mile coastal path where now runs the A99 highway. With the help of one of the family’s servants, Isabella, John, and John’s sister hatched a plot to escape Wick and make their way to Canisbay “quam primum,” the sources say—as soon as possible—across the flat, treeless plains of Caithness where the temperature hovers at 32˚ in the winter months. Canisbay is somewhat to the southwest of John o’Groats, so the couple would probably have ventured north in a slightly more easterly direction than John would have taken from John o’Groats. The couple were wed on February 20, 1792, in Canisbay, Caithness, where John eventually became the keeper of an inn, no doubt providing a hearth for other travelers on the night roads of the Caithness plains.