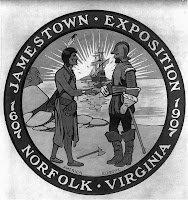 In the mid-1600s, Captain John Rice Hughes, a Welshman known in the area simply as “Trader” Hughes, established a trading post at Jamestown, Virginia, in order to trade primarily with the Powhatan Indians in the area.  It has been said that if the Jamestown colony had not been trading with the Native Americans in the area, they would not have survived their first winter.  But how did trade benefit the Indians?


The Powhatans, a confederacy of thirty Algonquin-speaking tribes, highly prized copper, but at that time, they were at war with the Monacan and Mannahoac tribes, who mined copper in the Lake Superior region.  Thus, the Powhatans were motivated to find an alternative source.


In 1580, at the time of the Roanoke colony, the English had become aware of the value of copper to the Powhatans and, in subsequent trips, brought sheets of copper from England for the express purpose of establishing trade. 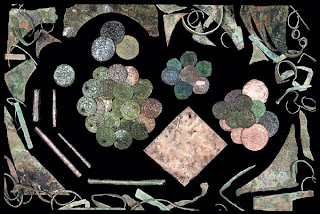 Why did the Powhatans value copper so greatly?  Considering copper to be rare and beautiful (the way many cultures look at gold), they used copper to make jewelry—both necklaces and bracelets—and, accordingly, to signify the elite status of the copper-bedecked warrior (see above). Copper was also used in religious practices and in burials.  The famous John Smith of Jamestown recorded the brisk nature of the trade, thus, “For a copper kettle, the Powhatans will sell you a whole countrey [sic]” (Mallios and Emmett).


Another commodity of interest to the natives was blue beads.  Heather A. Lapham of the University of Virginia tells the story well.  When John Smith and others from Jamestown met with Powhatan to trade for corn, they became aware of Chief Powhatan’s great interest in the blue beads the English had with them.  Though the beads did not have great value in the eyes of the Europeans, the Powhatans prized them for use in their religious rituals.  Smith noted the chief swapped “a pound or two of blew beads” [sic] for “2 to 300 bushels of corne” [sic], proving the maxim that rarity increases the value of a commodity.


The Powhatans would also trade pelts and, in addition to corn, foodstuffs such as squash and beans  [“Monacan Indians”].


“Trader” Hughes set up his trading post near the spot where Virginia’s Routes 130 and 29 meet today.  In the course of his contacts with the Powhatans, he met and married one of the daughters of Chief Opechancanough.  A sister of Pocahontas, Nicketti Mangopeesomon (“She-Sweeps-the-Dew-from-the-Flowers”) eventually gave birth to a baby girl (Mary Elizabeth) in Jamestown in 1650, and she, in her turn,  married Nathaniel Davis, another trader.  The son of Nathaniel and Mary Elizabeth continued the “family business,” so to speak, and he is known in the records as Robert “the Trader” Davis.


As we know from the history books, the Powhatans and the Europeans had their share of confrontations.  Interestingly, though, it is also said that Chief Opechancanough made sure that the Hughes and Davis men received protection from any violence in the region.