﻿
Nobody likes to have their property or titles taken away from them, but in 1471 when King James III decided he wanted the Orkney earldom for himself, he swapped Ravenscraig Castle for the earldom, which was held by William Sinclair (1408-1480), the Earl of Orkney and Caithness at the time (see at right).


﻿﻿﻿﻿﻿
Ravenscraig Castle was located in Kirkcaldy, just north and slightly east of Edinburgh across the windswept Firth of Forth.  Like King James before him, Sinclair intended for the castle to have substantial artillery fortifications.  Thus, on both the east and west ends on the front side of the castle were rounded towers massively thick (some say up to 15-feet thick).


﻿﻿            Perhaps that is why the castle was the first in Scotland to be able to stand up to the cannons of the age. In addition, cut into the walls of the castle are keyhole-shaped shot-holes for artillery defense of the front side and the postern gate (see image at left).
﻿
﻿             Images of the ruins of Ravenscraig suggest that distinct romantic “feel” that one associates with the great castles of the age.  Since nowadays the city of Kirkcaldy has grown out quite close to the castle, it is said to have lost some of its romance, but the southern view toward the Firth of Forth can still give one that secure feeling the Sinclairs would have felt, knowing their castle was well-fortified on the front and virtually inaccessible in the rear (see at right).﻿
﻿﻿﻿﻿
﻿﻿


﻿﻿
﻿
One of the fun features of Ravenscraig is the dovecote (or “doocot,” as it was pronounced in Scots).  In the Middle Ages, pigeons and doves served as a food source, so much like a farmer today might have a chicken house, medieval castles had dovecotes.  Not only the fowl themselves, but also their eggs served as food, and even their dung could be put to use in the process used to tan leather.  Scottish doocots, as the Ravenscraig example shows, were often shaped like a bee-hive and had an opening at the top.
﻿


Interestingly, despite the smell that must have been associated with them,  doocots were a symbol of status and power and were only to be owned by members of the nobility under a special right (droit) known as droit de colombier, the French word colombier being derived from the Roman columbarium (pigeon house).


But despite those practical matters of food and defense, Ravenscraig’s tale is ultimately about the people of the place—their aspirations and their loves—and who better than Scotland’s beloved novelist and poet, Sir Walter Scott, to tell the sad tale of the beautiful Rosabelle Sinclair, who leaves Ravenscraig (Ravensheuch) and meets a terrible fate on the firth.  In Canto VI of The Lay of the Last Minstrel, Scott writes:


No haughty feat of arms I tell;


Soft is the note, and sad the lay,


That mourns the lovely Rosabelle.


And gentle ladye, deign to stay!


Nor tempt the stormy firth to-day.


"The blackening wave is edg'd with white:

To inch and rock the sea-mews fly;


The fishers have heard the Water-Sprite,


Whose screams forebode that wreck is nigh.


Then stay thee, Fair, in Ravensheuch:


Why cross the gloomy firth today?"


" 'Tis not because Lord Lindesay's heir


To-night at Roslin leads the ball,


But that my ladye-mother there


Sits lonely in her castle-hall. 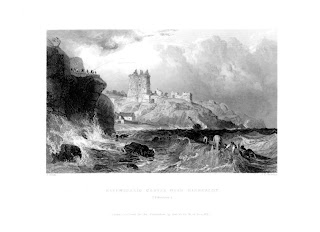 " 'Tis not because the ring they ride,


But that my sire the wine will chide,


If 'tis not fill'd by Rosabelle."


O'er Roslin all that dreary night


A wondrous blaze was seen to gleam;


'Twas broader than the watch-fire's light,


And redder than the bright moonbeam.


It ruddied all the copse wood glen;


Seem'd all on fire that chapel proud,


﻿﻿Each Baron, for a sable shroud,


Sheath'd in his iron panoply.
Seem'd all on fire within, around, 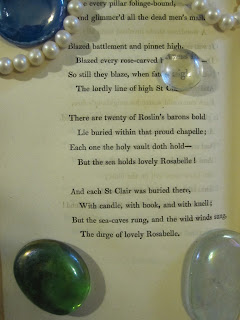 And glimmer'd all the dead men's mail.


So still they blaze when fate is nigh


There are twenty of Roslin's barons bold


Lie buried within that proud chapelle;


Each one the holy vault doth hold--


But the sea holds lovely Rosabelle!


And each St. Clair was buried there,


With candle, with book, and with knell;


But the sea-caves rung, and the wild winds sung


The dirge of lovely Rosabelle.


View of the Firth of Forth from Ravenscraig.  Photo by Garry.  I Travel UK. Used with permission. http://www.itraveluk.co.uk/photos/showphoto/photo/1473.php