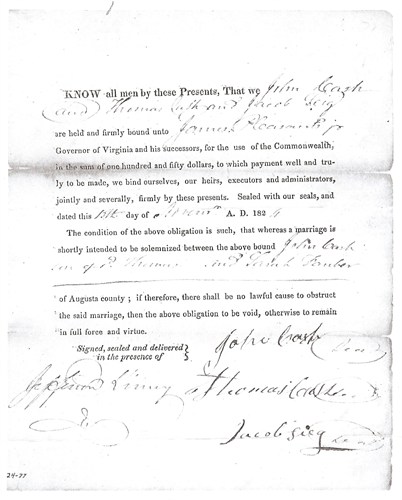 Know all men by these Presents, That we John Cash and Thomas Cash and Jacob Seig are held and firmly bound to James Pleasants, Governor of Virginia and his successors, for use of the Commonwealth, in the sum of one hundred and fifty dollars, to which payment well and truly to be made, we bind ourselves, our heirs, executors and administrators, jointly and severally, firmly by these presents.  Sealed with our seals this 15th day of November A.D. 1824.


The condition of the above obligation is such that whereas a marriage is shortly intended to be solemnized between the above bound John Cash son of [indistinguishable]Thomas and Sarah Fauber of Augusta County; if therefore there shall be no lawful cause to obstruct the said marriage, then the above obligation to be void, otherwise to remain in full force and virtue


Signed, Sealed, and Delivered in the presence of:


Jacob Sieg lived in Greenville, Augusta, Virginia, and appears in the 1820 census.

Take a peek at the life of Llywelyn ab Iorworth (1172-1240) and you will see the High Middle Ages themselves.

Known to history as Llywellyn Fawr (Llywelyn the Great), Prince of Gwynedd, Llywelyn was not only a man of his times, but a man for his times.  His father, Iorworth, had been one of nineteen sons of Owain Gwynedd, king of Gwynedd, the northwestern-most point of Wales (see map below).

When Owain died, his sons fell to fighting, and the two sons of Owain’s second wife—Dafydd (David) and Rhodri—triumphed through treachery and cruelty.  Iorworth was driven out of Wales and died at the age of 22.  Llywelyn was just a tot at the time, and his story is the story of the recovery of his grandfather’s kingdom—and then some, battling Anglo-Norman kings and becoming embroiled in all the big events of his day.


And that is why his life can be viewed as a microcosm of medieval Europe.


﻿﻿Let’s start with geography, not the most thrilling subject to most Americans, but looking at it from Llywelyn’s point of view, you’ve got to know (a) where your kingdom is, (b) where your enemy is, (c) where your ally is, and (d) where those pesky “Normans” are (they had been English kings and earls for a hundred years now, but to the Welsh, they were still French).


So, Llywelyn’s homeland was Gwynedd (Note: in Welsh, dd is pronounced as th).  Throughout most of the medieval period, there was no king of Wales as such, just princes (sometimes they called themselves kings) of the various principalities. Thus, Llywellyn was the prince of Gwynedd.


His nearest enemy would have been in the principality just to the east, Powys (in gray).  Over the years, he had a number of altercations with the ruler of Powys, and finally annexed southern Powys to his own kingdom—which is one of the reasons they call him “the Great.”


allies would have been in Scotland.  In fact, he married one of his natural daughters, Elen the Younger (not to be confused with her older sister, Elen the Elder), to an earl of Fife. In addition, depending on the year, he also found an ally in the English county of Chester, where the Norman earl, Ranulf de Blondeville, could be counted on. (Note to the Gards: Believe it or not, Ranulf, or more specifically his sister, is an ancestor on the paternal side of our family!)

And, last, the pesky “Normans” were all about: two kings of England—King John (the “evil” brother of Richard the Lionhearted), who, by the way, was the father of Llywelyn’s wife (it gets complicated); and King Henry III (the two came to blows in the 1230s).


But there were other Anglo-Normans roaming around Wales.  Earl Ranulf has been mentioned already (fortunately, they were on friendly terms), but there was another guy named Hubert de Burgh.  Hubert (or, as he would probably have said it, "oo-BEAR") was the earl of Kent, but he seems not to have spent much time in Kent, which is completely on the other side of the isle and much to the southeast.  Rather, he seems always to have been romping around on the king’s errands, most of which took him to Wales, where he probably headquartered at Montgomery Castle, which the king had given to him for his services.
Again, this relationship gives us another glimpse of medieval life because a person who was your enemy one day would be your friend the next and vice versa. It all depended on how the winds were shifting in London or Edinburgh or Rome.  So, Hubert was an erstwhile enemy, but at one point got himself in big trouble with the king because he had “furtively removed from the royal treasury a gem which made its wearer invincible in battle and had bestowed it upon his sovereign's enemy”—our man, Llywelyn the Great!