Walter Green (1786-1860) and his family were boat builders, net weavers, and herring fishermen in the herring industry centered at Wick on the eastern coast of Scotland throughout the nineteenth century—and probably even before that in the Canisbay region.  Though herring fishery had been a part of life in Caithness for hundreds of years, it began to boom in the 1790s, spurred on partly because of the distressing Highland Clearances, which forced thousands of Scots from their villages in order to expand government-sponsored, sheep-based agriculture.


Many Highlanders, forced out of their homes in droves, emigrated to America, but there were also many who moved toward the east coast of Scotland where they could begin new lives as fishermen and boat builders.  Though marine industries were well-established in the town of Wick, it was too small to accommodate the massive numbers displaced by the Clearances.  Therefore, Sir William Pulteney, governor of the British Fisheries Societ﻿﻿﻿﻿﻿﻿﻿﻿﻿﻿y, commissioned Thomas Telford, Britain’s leading civil engineer of the day, to design and establish a fishing town and harbor at the estuary of the Wick River, a place which came to be called Pulteneytown (see image below left). 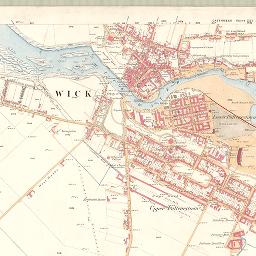 The rapid expansion following the establishment of Pultneytown south across the river from Wick is borne out by the fact that from 1808 to 1814, the number of boats using Wick Harbor shot up from 214 to 822.  By 1850, the herring fleet at Wick had 1,000 boats so closely moored together that one could cross from one pier to another dry-shod.[i]  My third great-grandfather, Walter Green, was very much a part of this expanding industry.


orn in Canisbay, which is also in Caithness but farther to the north where the North Sea joins up with the Pentland Firth.  At the age of 28, Walter appears in Wick where he married Margaret Sutherland on July 1, 1815.


Scottish census records are a bit thin on Ancestry.com, and I have found no second record of Walter until he appears at age 55 in the 1841 census, where he is identified as a boat builder by trade.  The family resided at 26 Bank Row, where son Robert was still living at the age of 70 in1901.  Four of Walter’s five sons worked with their father as boat builders and continued the family business after Walter’s death in 1860.


﻿﻿﻿
Walter’s business was greatly affected by Scotland’s competition with the Dutch, who were, early on, the leaders in herring fishery. Copying the successful Dutch, the Scots built boats called “herring busses,” which were outfitted with sails to carry the Dutch far into the North Sea (see above).  But Scotland had a geographical advantage in that every summer the herring would migrate into the Orkney area.  Realizing they were better placed than their Dutch rivals to exploit this situation, the Scots decided  they could operate more quickly and efficiently with smaller open boats, a change which kept Walter and sons quite busy as they responded to the growing demand for open boats (see below). Soon, the Scots moved ahead of the Dutch in the herring fishery business.
﻿﻿
n addition to the work of boat building, the Green family were engaged in other related trades.  For example, two of Walter’s daughters, Rose and Margaret (but not my direct ancestor, Helen),  were employed as net weavers in Wick.  Net weaving was a centuries-old occupation in Caithness and was largely done by females.  Near the end of the 18th century, as the Age of Industrialization was underway, looms were invented which would relieve the weavers of some of their tedium.  By the late 19th century, more than 2000 people, mostly women, were employed at nearly 600 looms in Scotland.  Surprisingly, Wick, “the metropolis of the herring fishery,”[ii] was one of the last places to industrialize, so Rose and Margaret kept themselves employed on the old looms for longer than most, which could be viewed negatively by those who like to keep up with the times but perhaps more positively by those who enjoyed the peaceful hand work at the water’s edge (see photo above).


﻿
By 1851, when Walter was 65, he had cut back a little from building boats, leaving that in the hands of his able sons, and taken up another Wick-based trade, that of fish curer, which probably required less physical strength.  Fish curers received the herring from the boats, gutted them, and packed them in barrels.  The best would receive the stamp of the crown on the lid and would bring high prices in the European market.


alter Green passed away on February 20, 1863, at the age of 73.  His sons Robert, William, John and Walter, Jr., kept up the boat building business, and Rose and Margaret continued with their net weaving.  Daughter Hellen married Donald Bain, a shoemaker of Wick, and lived with her husband on Bank Row, the same street on which she had been born and raised.