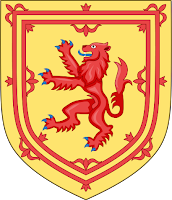 An illegitimate son of Scotland’s King James V, Robert Stewart (1533-1592) was acknowledged by the king and raised as a prince of the blood, along with three other illegitimate sons, John, James secundus, and James tertius (each with a different mother).  In his biography of Robert Stewart, Peter D. Anderson details the provisions the king made for Robert and the others during their boyhood.


One suitable path for sons of the nobility and the royal family was a career in the Church, but there was an impediment in James’s way since it was not possible for illegitimate persons to be ordained by the Church (Hallam 37).  Therefore, it was necessary to seek legitimization, and on December 30, 1534, the pope granted a dispensation so that the sons of James V could receive appointments in the Church.[1] The boys, of course, were still wee bairn at this time, but each boy received his tonsure when he reached the age of six (1559 in Robert’s case).


The next step in the process was to find each boy a source of revenue, so in keeping with the Church career that he was planning for the boys, King James eyed Holyrood Abbey in Edinburgh. Though Holyrood is known to many generations of tourists as the site of the royal palace, at this point in Robert’s life, the adjacent Holyrood Abbey (now in ruins) was still an Augustinian monastery. On December 16, 1538, James approached Pope Paul III to secure Holyrood as a benefice for Robert, who was now five years old, and on August 18 of the following year, Robert became commendator (holder of the benefice) at the ripe old age of six. 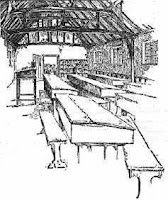 Next after the tonsure and the benefice came education.  Accordingly, Robert and his brothers were enrolled as “scolares” in the diocese of St. Andrews in 1534 (again considerably in advance of the usual age for such a thing, Robert being only one year old at the time).  In June 1540, when he was seven, he actually arrived in St. Andrews to begin his education.  Educated probably at the priory or by the cathedral clergy, young Robert was assigned servants, cooks, and (somewhat surprisingly) a minstrel.  His personal servant was named Thomas Carmichael.


Robert now began to receive grants from the royal treasury, no doubt to support him while he was away from the court.  Details of the lad’s wardrobe expenditures have survived, and they included the following:


a.  a doublet of black fustian (coarse, sturdy cloth of cotton and linen) – 16 shillings


b.  two coffers in which the clothing could be contained during transport (one possibly for his brother John) - £5


When James V died late in 1542, the job of providing for the boys fell on the shoulders of James Hamilton, 3rd Earl of Arran, who was regent for their infant half-sister, Mary, Queen of Scots.  Robert is listed as attending parliament in August 1546 (age 12).  On March 20, 1547,  Robert’s “year of maturity,” a letter was drawn up in Mary’s name, requesting the King of England allow Robert and his escort, John Hamilton, bishop of Dunkeld, free passage through England as young Robert made his way to France to further his education.  However, this venture never came to fruition, and Robert did not embark for France until July 1548 when he departed from Dunbarton with Mary, as she left to be raised at the court of France in accord with her marriage contract.  Robert is described as being “of fervent desire and mynd to exerce his youtheid studying in lettiris, in gude maneris” (Anderson 8). 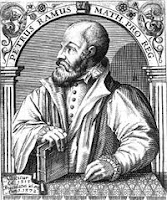 In the boy’s retinue in France were two of his half-brothers; John Carmichael, parson of Inbernochy; David Carmichael, vicar of Dunrod; Andrew Callendar; Robert Carmichael, chamberlain to the commendator; and James Stewart, son of the former abbot of Dryburgh.  In France, Robert was probably instructed with his brothers by Peter Ramus, a well-respected humanist scholar [right].  Returning to Scotland in 1551 (age 18), Robert surfaced at meetings of the privy council at Stirling and at Perth (1552 and 1553, respectively)—his boyhood behind him and young adulthood ahead.


[1] Anderson indicates that it was Pope Clement VII who granted the dispensation on 30 Dec 1534; however, it is more likely to have been Pope Paul III since Clement had died in September of that year.
http://geneabloggers.com
at February 18, 2013 No comments: 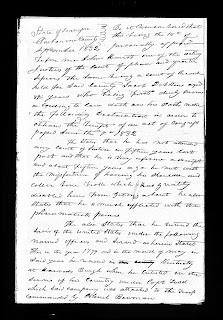 Jacob Dobkins, aged 81, . . . states that he has not attended any Court of Justice in fifteen years. . . .and that he is very infirm and decrepit and about fifteen years ago he met with the misfortune of having his shoulder and collar bone broke [sic] which has greatly disabled him from getting about. He also states that he is much afflicted with the pneumatic pains.


He also states that he entered the service of the United States under the following named officers and served as herein stated. That in the year 1779 and in the month of May in said year he resided in Kentucky at Harrodsburgh where he enlisted in the service of his country under Capt. Todd, which said company was attached to the troop commanded by Colonel Bowman. Colonel Bowman shortly afterward marched to the Chilicothe towns against the Indians and the company to which this applicant belonged to [sic] commanded by Capt. Todd was left to guard the fort at Harrodsburgh where he remained until the spring 1780 and this applicant states that he was then transferred to a company commanded by Capt. McGarvy [?] and we marched to the falls of the Ohio with the view of guarding the artillery up the river which we accordingly did and joined the troops commanded by General Clark. Sometime in the month of July in the year 1780 we were then ordered by General Clark to march up the river with a view to kill provisions for the army [hunt?]. We accordingly marched up the river to the mouth of the Kentucky River where we attempted to cross the river to join the main army who were camped on the other side of the river. The Indians made an attack upon us and in the engagement we lost ten of our men. We then marched up the river to Cincinnatti where we joined the troops commanded by Colonel Logan. We then built a block house and stationed a guard and the whole of the balance of the army mached to the Chilicothe towns and the Indians evacuated the towns and would not give us battle. We then pursued them to the Pickway towns where we arrived in the month of August in said year. We then found the Indians collected together and we had a very severe battle which lasted about three hours and a half. We killed a considerable number of them, and I think our loss was about 28 men. This applicant states that he did not receive any wounds in the battle but that there was [sic] several bullet holes through his clothes and applicant states the whole of the army then marched back to the Shawnee [?] Springs where this applicant was stationed until the month of May [unclear] 1781 and during which time we had no general engagements, that a great portion of our time was spent in skirmishing parties through the country. Said applicant states that he actually did serve in the army of the United States putting the whole together more than two years. Applicant states that he does not remember that he ever did receive a discharge and if he did he has lost or mislaid it so that he cannot produce it. He states that he has no documentary evidence of his services nor does he know of any living testimony by whom he can prove his service. He duly relinquishes every claim to a pension or an amount equal to [unclear] and declares that his name is not on the pension roll of any agency of any state whatsoever.


[The court at Claiborne County accepted the testimony and granted the pension.]
http://geneabloggers.com