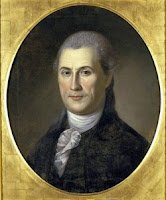 Okay, to all of you Gards out there in Kith-and-Kin Land, here’s a tale that will give you bragging rights even though (alas!) it is definitely a tale of a shirt-tail kin.


Let’s start with something you may have heard in school or read in the press at some point in time.  Have you ever heard it said that George Washington was the SECOND president of the United States?  That there was someone else who served as president from the time of the Constitutional Convention until Washington’s inauguration? 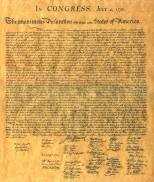 guess what!  We’re related to him. Now, even if you don't buy the idea that he was actually our first president, you can at least take great satisfaction in the fact that he was a signer of the Declaration of Independence and  president of the Second Continental Congress.  He’s an in-law of sorts.  In-laws are great—especially when they give you bragging rights (as which in-law amongst us does not?!).


I was not able to attach the genealogy chart to the blog, so I will email that to you separately.  You will notice that the entrants are done in two colors: blue for the Huntington family and red for the Gards.  Now, the Huntingtons arrived in New England in 1633.  Simon, the man at the top of the chart, actually died on board the ship when the Connecticut coast was already in sight (smallpox, you see)!  The first thing the family did upon setting foot in their New Land was to bury their father.  Not an auspicious beginning.  Yet despite this tragedy, the family did not “curse God and die,” as Job’s wife would probably have advised.

Instead, they put their noses to the grindstone and got busy.  Now look on the chart, focusing particularly on Simon I's second and third sons: Simon II and Thomas.  From Simon II descends our illustrious shirt-tail ancestor: Samuel Huntington, signer of the Declaration of Independence and “the real” first president of the United States (more about this anon).  From Thomas descends Phoebe Huntington, wife of Gershom Gard.


Now, who was Gershom Gard (red box) and how is he related to us?  You will see that Gershom’s father was Jeremiah Gard (b. 1717) of Morristown, New Jersey (which was Washington’s “capital” during the Revolutionary War).  You will also note that Gershom had a brother named John (here he is designated as John Gard, Sr., because he had a son whom I have designated as John, Jr.).

So, the in-law connection is that John Gard, Sr., was the brother-in-law of Phoebe Huntington, who had a blood relationship with the Great Man Samuel Huntington, whose name appears inside a star at the bottom of the chart.  (You don’t really expect me to tone this down, do you?  Let the trumpets resound!)

Here is the resume of dear old Sam:


1753:  Self-taught; passed the bar exam
1764:  Elected “select man” for the town of Norwich, Connecticut
1764:  Elected representative to the Connecticut House of Representatives
1765:  Elected to the Upper House of the Governor’s Council
1768:  Appointed king’s attorney for Connecticut
1773:  Appointed to Connecticut Superior Court (like a supreme court)
1775:  Elected to the Second Continental Congress
1776:  Signed the Declaration of Independence
1779:  Elected president of the Second Continental Congress (Articles of Confederation were passed during his tenure)
1781:  Forced to retire and return home due to ill health (smallpox)
1782: Again elected as delegate to the House of Representatives but too ill to take the position
1783:  Health improved; again able to serve as delegate (Treaty of Paris signed 1783)
1784:  Re-elected to the Upper House of the Governor’s Council
Became Chief Justice of the Superior Court
1785:  Elected Lieutenant-Governor of the state of Connecticut
1786:  Elected Governor of Connecticut (re-elected annually until his death in 1796)
1786:  Brokered the Treaty of Hartford (resolving land claims by New York
and Massachusetts)
1787:  Supported the Northwest Ordinance
1788:  Presided over of the Connecticut Convention to ratify the Constitution of the United States
1789:  As president of the Second Continental Congress, was unofficially the first president of the United States (Washington not inaugurated until April 30)
1789-96:  Transitioned Connecticut from a colony to a state; helped establish Hartford as the capital; oversaw the construction of the State House
1796:  Died at his home in Norwich (tomb located down Old Cemetery Lane adjacent to the Norwichtown Green)
So, in-laws!  Keep up the good work!  We all are proud of you!
Sources:
Crayon, J. Percy.  Rockaway Records of Morris County, N. J. Families.  Rockaway, N. J., Pub. Co., 1902).  Available online.
“Declaration of Independence Signatures.”  http://www.revolutionary-war-and-
beyond.com/declaration-of-independence-signatures.html
“Samuel Huntington.” Wikipedia.  http://en.wikipedia.org/wiki/Samuel_Huntington_
(statesman)
© Eileen Cunningham, 2013
at March 03, 2013 No comments: