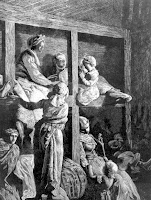 William G. Travis was the first in our branch of the Travis family to be born in—well, therein lies the problem.  William was born at sea during his parents’ emigration from the “Old Country" in 1774.


One can only imagine what childbirth at sea was like for his mother, Mary (maiden name unknown).  Infant mortality and death during childbirth were not altogether uncommon in the late eighteenth century.  Lack of sanitation must certainly have contributed to the death toll even under the best of circumstances.  But what would childbirth on board an eighteenth-century ship have been like?


·         How much privacy did a child-bearing woman have in such close quarters?


In addition to the physical and medical aspects of childbirth at sea, there are questions about the emotional, social, political, and religous aspects of bringing a child into the world.
·         How would a baby’s crying have affected other passengers?


·         Little Will was actually Mary’s fourth child.  Would the children’s father (William A. Travis) have attended to their needs from the time of Will’s mid-Atlantic birth to the arrival of the ship in the New World?


·         How would the parents have seen to religious practices regarding, say, infant baptism (which is practiced by Presbyterians, the religion of Will’s parents)?


·         Given the fact that sea voyages from the British Isles to America took about three months in that time period, one also wonders what urgency could have prompted the parents to set sail when the mother was relatively close to her “lying in”?


·         Will was born just two years before the American Revolution, and political tensions were already high.  Would full rights of citizenship (including what was called “the king’s protection”) have been extended to British subjects not born on British soil?


The questions roll on and on.  As a mother and grandmother myself, I have great respect for Mary Travis, my fifth great-grandmother, and all the other women who gave birth during their passage to the New World.