In 1640, the immigrant brothers John and Richard Ogden from Bradley Plain, Hampshire, England, arrived at the port of Southampton, Long Island. This particular John Ogden (b. 1609) is referred to in history as John “the Pilgrim” Ogden to differentiate him from his cousin, also named John Ogden, and pilgrim indeed he was.


William Ogden Wheeler, a descendant of John Ogden and author of the book The Ogden Family in America, says this about John the Pilgrim: “It is true that a close study of the ‘good old times’ reveals the presence and doings of many selfish and unscrupulous men, and the Colonial period thus loses much of its pristine fascination; yet the sturdy, self- poised, resolute, and godly Pilgrims and Quakers, whose righteous principles and lives were interwoven in the American fabric of civil and religious liberties, are to be held in the highest veneration by their numerous descendants. To this class belonged John Ogden, the Pilgrim . . . .”


John Ogden and his son after him, David Ogden, were stone church builders. At the time of Ogden’s arrival on this continent, New York was a Dutch colony called New Amsterdam. Like many of the early Americans, the Dutch immigrants were members of the Reformed religion, that is, they followed the teachings of John Calvin (much like the Presbyterians of Scotland). One of their early needs, therefore, was the construction of a church. To this end, they employed John the Pilgrim to build a stone church in New Amsterdam. The image above right depicts the church the Ogdens built, rising above other buildings in Fort Amsterdam, while the plan of New Amsterdam (below right) shows the sizable area given over to the church and churchyard in the southwest corner of the town. 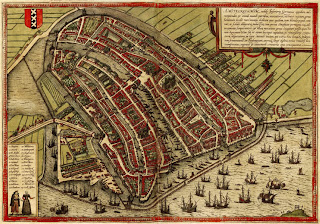 Wheeler provides these details about the church's construction: “A contract was drawn up in May, 1642, setting forth an agreement between Governor William Kieft, Gisbert op Dyck, and Thomas Willet, of New Amsterdam, Church-wardens, to build a stone church in the fort, 72 ft. by 50 ft. and 16 ft. above the soil, for the sum of 2500 guilders (about $1000), to be paid in cash, beaver or other merchandise; if the work was done ‘in a workmanlike manner’ 100 extra guilders were to be paid the contractors, John Ogden and his brother Richard, both of Stamford, Conn. It was stipulated that the latter should be allowed the use of the company's boat to ferry the stone ashore near the fort, the wardens agreeing to carry the stone from the shore to the fort, and to furnish the lime with which to lay them.” 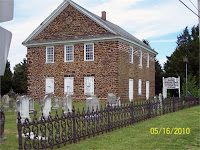 The old stone church of Fairfield Township, New Jersey (left), which still stands, is of the type that David Ogden built. Though the style was influenced by the Quaker churches of the era, this was a Presbyterian church. Interestingly, the graves of numerous Ogdens are in the churchyard.


A resident of Newark, New Jersey, David Ogden (b. 1639), son of John the Pilgrim, was also a stone church builder. Wheeler notes that the Newark Town Records of 1670 state that “nearly all the trades and callings necessary to the convenience and comfort of the colony were represented”; among them is mentioned “a stone church builder, David Ogden.”


Wheeler, William Ogden. The Ogden Family in America, Elizabethtown Branch, and Their English Ancestry: John Ogden, the Pilgrim, and His Descendants, 1640-1906. http://www.ebooksread.com/authors-eng/william-ogden-wheeler/the-ogden-family-in-america-elizabethtown-branch-and-their-english-ancestry-j-eeh/page-2-the-ogden-family-in-america-elizabethtown-branch-and-their-english-ancestry-j-eeh.shtml